The complete photo shoot of the selected photos from the DBM Cover and feature.

Behind the scenes video here http://galleries.blinkitproductions.net/Portfolio/BLINKit-Productions-Video/15220134_v2vBQ4#1525259735_FNdFvxq-A-LB

We were contact by, Enigma Fashions, to do a cover shoot for The Dark Beauty Magazine. The theme, "Hidden Spaces". was a very excited shoot.
We knew we will have limited time and maybe space, so we predetermined some photoshop will be needed.

We first constructed ideas with what the designer vision (Enigma Fashions)was.
To minimize post-processing we shot the photos with the correct composition and color to superimpose the individual images into the final photo.

Victorian Maiden
Our first two looks were in very small space, so we had to make the model sell the image by their emotions.

Then we continued on with the warlock series that she is being controlled by him. The back ground had a spot
light and a bounce off to fill the left side of the models. We also added some skeleton to make it more eerie.

The final shot was done around 9pm at a park. We couldn't see the background so we decided to kill the
ambient light and superimpose a background later in post. The soul takers are dragging them to the darkness of the forest.

The Mummy
The back drop was a dark red velvet cloth. We wanted to separate the back drop from the model so we put
a spot light behind her and main light on left. On two of the photos we wanted to photo shop the mummy coming
out of her tomb, her out of the tomb, and a beauty shot with some dry skin and dusty completion. So I took a
photo of some dry dirt and small rocks and photoshopped that.

This photo shoot was by far one of the coolest one yet. 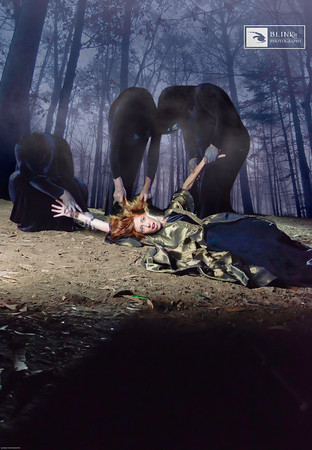 Inland Empire, Temecula, Murrieta, LA, and San Diego Editorial and Lifestyle photographer © 2013-2018. All Rights Reserved. Blinkit Photography is an editorial and lifestyle photographer, to document cherished moments in the lives of their clients. Their images have been featured in magazines around the world, as they continue to innovate and reinvent their creative style. Mike & Stephanie is a husband and wife team that cater to high end and timeless images with an editorial flair to make your images pop and memorable. Mike and Stephanie have worked from the City of Corona to fashion designers, having had the opportunity to photograph the cast of Twilight Breaking Dawn Pt2.  Blinkit Photography is a high school senior, dance, family, and event photographer in the Inland Empire that coverages from San Diego to high school senior photographer Temecula California. They also cater to limited animal and pet photography with their popping colors and editorial storytelling.